The U.S. Department of Education (ED) invited schools to enter the CTE Makeover Challenge by submitting a design for a CTE makerspace.

A makerspace is an environment or facility that provides resources, materials, and equipment for students to conceive, create, and collaborate through making. Making refers to a hands-on learning approach that encourages students to imagine, create, and tinker through the process of manufacturing, testing, and demonstrating their ideas. Through making, educators enable students to immerse themselves in problem-solving and the continuous refinement of their projects while learning essential 21st-century career skills, such as critical thinking, planning, and communication. ED sought models of CTE makerspaces across a wide range of facility types, such as classrooms, libraries, and mobile spaces, that it could share with educators to encourage the creation of affordable, scalable, and replicable makerspaces.

All eligible schools were invited to participate in the CTE Makeover Bootcamp, a 6-week program that provided resources and expertise in makerspace design and planning. $200,000 in cash and other prizes were distributed to 10 prize winners to turn their vision for a makerspace into a reality. Prize winners submitted a video tour of their constructed makerspaces and compiled an online portfolio of materials for use in the CTE Makerspace Showcase at the World Maker Faire in New York City in October 2016.

Submission
A CTE makerspace blueprint with designs and plans to turn the school’s vision for a makerspace into a reality.

On June 17, the 10 CTE Makeover Challenge prize winners were announced at the White House Champions of Change for Making event. Each winning school received $20,000 and a share of in-kind prizes donated by sponsors and valued at $375,000.

From mobile makerlabs to autoshop libraries to entrepreneurship hubs, these 10 makerspaces serve as exceptional models for all schools working on developing their own making programs. Take a look at these exemplary makerspaces from schools across the nation below:

Burlington, VT
Built from the ground up in a space that is currently empty, Studio B (Burlington) encourages students to work in an interdisciplinary fashion with all CTE programs. Welders working with artists, 3D modelers working with the aviation students, and Early Childhood Ed students working with programming and robotics students create opportunities for students to learn across disciplines. The program’s core elements are a part of every student’s personalized learning plan. This new facility and its instructors, students, and members are catalysts in renovating Burlington Technical Center’s adult education program.

Washington, D.C.
Capital City Public Charter School’s makerspace is the centralized hub of experiential learning, innovation, and 21st century skill building in the school. It is a joyous, inspiring space, allowing their 659 students in 5th-12th grade to create physical or digital objects that bring concepts to life. The makerspace will set Capital City apart as a place not only to learn, but also as a place for students to gain independence, creativity, and STEAM skills.

Chicago, IL
The Carl Schurz High School makerspace will be an inviting and open space where students can play, express, and cultivate their curiosity in the DIY culture.

Piedmont, MO
Clearwater High School’s CTE Makeover Challenge makerspace project, “Transforming Library Space for School and Community Engagement,” presents a flexible, mobile makerspace as the means for collaborative work between the school and community. Students and community members will work together, sharing knowledge, resources, and career networking. Students will be motivated with access to a wide variety of lab stations, allowing application of academic skills and development of creativity and innovation, while engaging in purposeful projects that solve “real world challenges” within the community. The makerspace will serve as a launchpad into high tech careers, introducing students to robotics, computers, engineering/electrical design, video/audio editing/production, graphic arts, and other creative processes.

Sterling, VA
The Dominion High School makerspace is an updated CTE classroom paired with a set of mobile maker carts. Students in the makerspace will have access to the latest in digital fabrication machines and electronics in order to create public products for the world that solve authentic challenging problems. The maker carts will be spread out around the school providing access to maker tools in every classroom.

Pacific Palisades, CA
The Pali STEAM Shop is a makerspace with a mission of social justice: to provide equitable access to the tools of innovation. Our vision has been to open a classroom that pays homage to traditional shop class, aggressively embraces innovation, and ensures that underrepresented students are active and engaged leaders in the program.

Lagrange, GA
The THINC College & Career Academy Makerspace is a collaborative area that allows our Engineering and Entrepreneurship students to work together in order to design, create, and develop marketing, promotional materials, and packaging for their products. Students are responsible for the maintenance and daily operations of the makerspace, and are supervised by the Entrepreneurship and Engineering instructor, along with guests from the local technical college and industry experts.

Austin, TX
The Travis Early College High School makerspace will debut in the fall of 2016 and is a space for the entire Austin community. Students, parents, and community members will utilize the area for collaboration and as a space to create solutions for local and global problems. The space is physically located between the school’s new commercial photography studio and new engineering shop, so it will be used heavily by those two STEAM programs as well.

The Challenge assembled an esteemed panel of judges, who drew from diverse education and tech backgrounds. Based on their individual expertise, judges recommended ten honorees to be selected by ED from the pool of eligible second round submissions (“Blueprints”). During open submissions, 100+ expert review panelists also supported the selection process.

Submissions were scored by the judges based on the quality of each submission according to the criteria below. Each of the following five selection criteria was assigned up to 20 points during the judging of open submissions in order to select finalists (for a total of up to 100 points):

ED reviewed the recommendations of the judges and had the option to consider additional characteristics when selecting honorees from the top scoring submissions to ensure diverse distribution of awards, including: 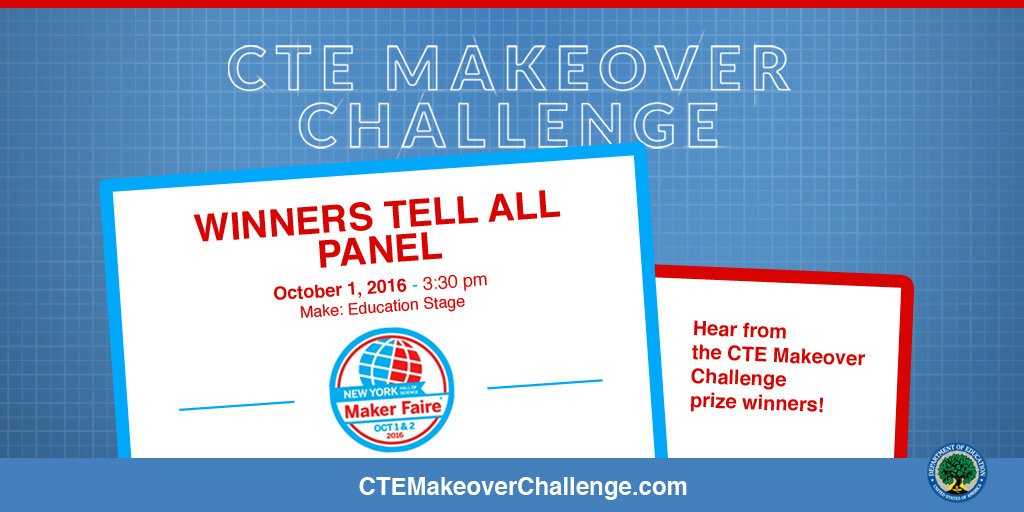 During a “Winners Tell All” Panel at Day 2 of the World Maker Faire, CTE Makeover prize winners shared how they brought their own makerspaces to life over the course of the Challenge. The prize winners also offered practical advice on how they secured early buy-in from administrators and school leaders to grow their maker programs. 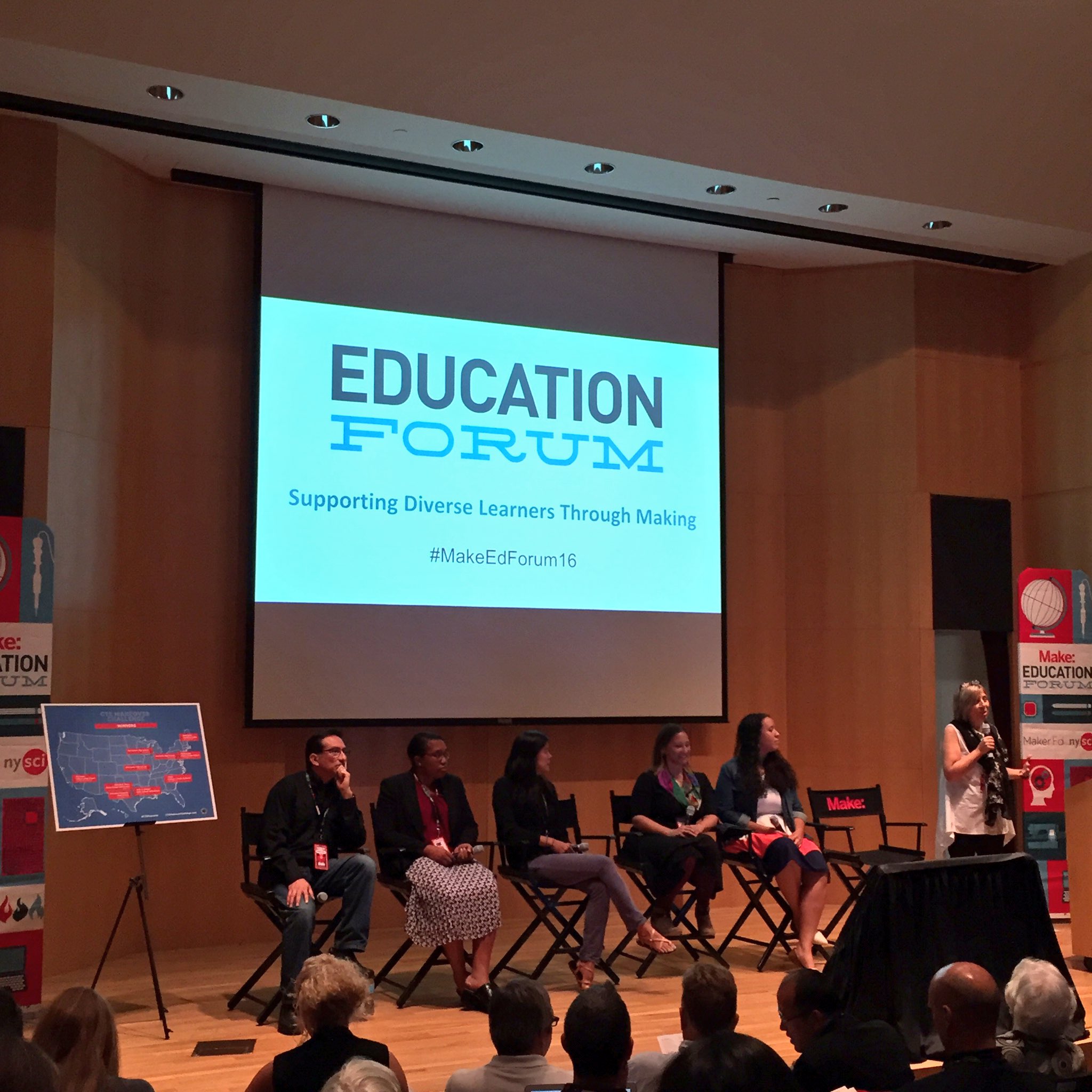 During a “Supporting Diverse Learners through Making” Panel at the Make: Education Forum Day 1 of the World Maker Faire, Albert Palacios, Office of Career, Technical, and Adult Education at the U.S. Department of Education, showed video tours from the winners and discussed how maker education supports diverse learning needs alongside a panel of esteemed speakers. 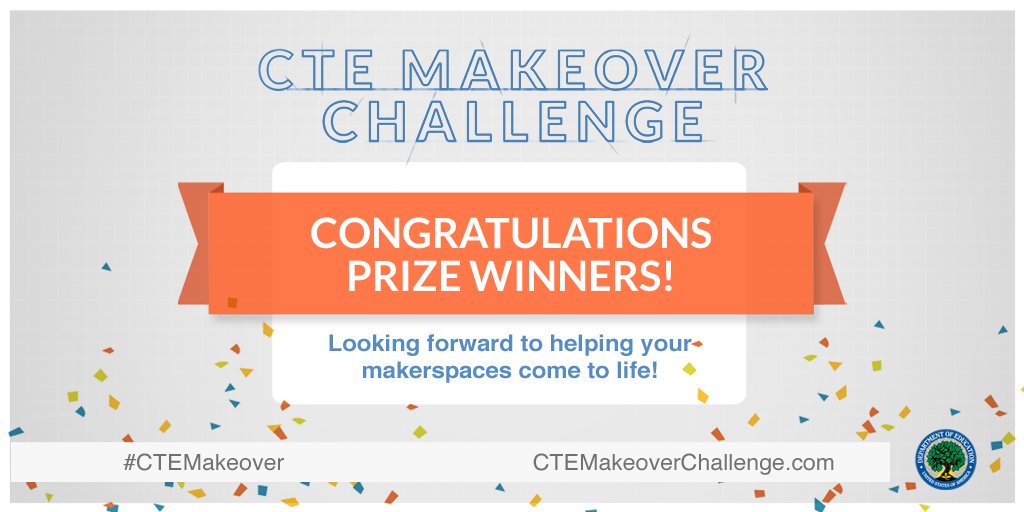 The 10 CTE Makeover Challenge prize winners were announced at the White House Champions of Change for Making event. Over 640 schools from all 50 states and Washington, D.C. entered the Challenge. Each winning school received $20,000 and a share of in-kind prizes donated by sponsors and valued at $375,000.

The six-week CTE Makeover Bootcamp was designed to help schools realize their vision for a makerspace. In addition to lesson plans and recorded webinars, schools had the option to participate in live, virtual group office hours to ask questions, and had access to communications toolkits and teacher guides to support the experience.

Following the Challenge launch, a live webinar covered several key topics, including an in-depth overview of the Challenge structure, criteria, and timeline. The webinar concluded with a Q&A session. A complete transcript of the Q&A session is here (PDF). 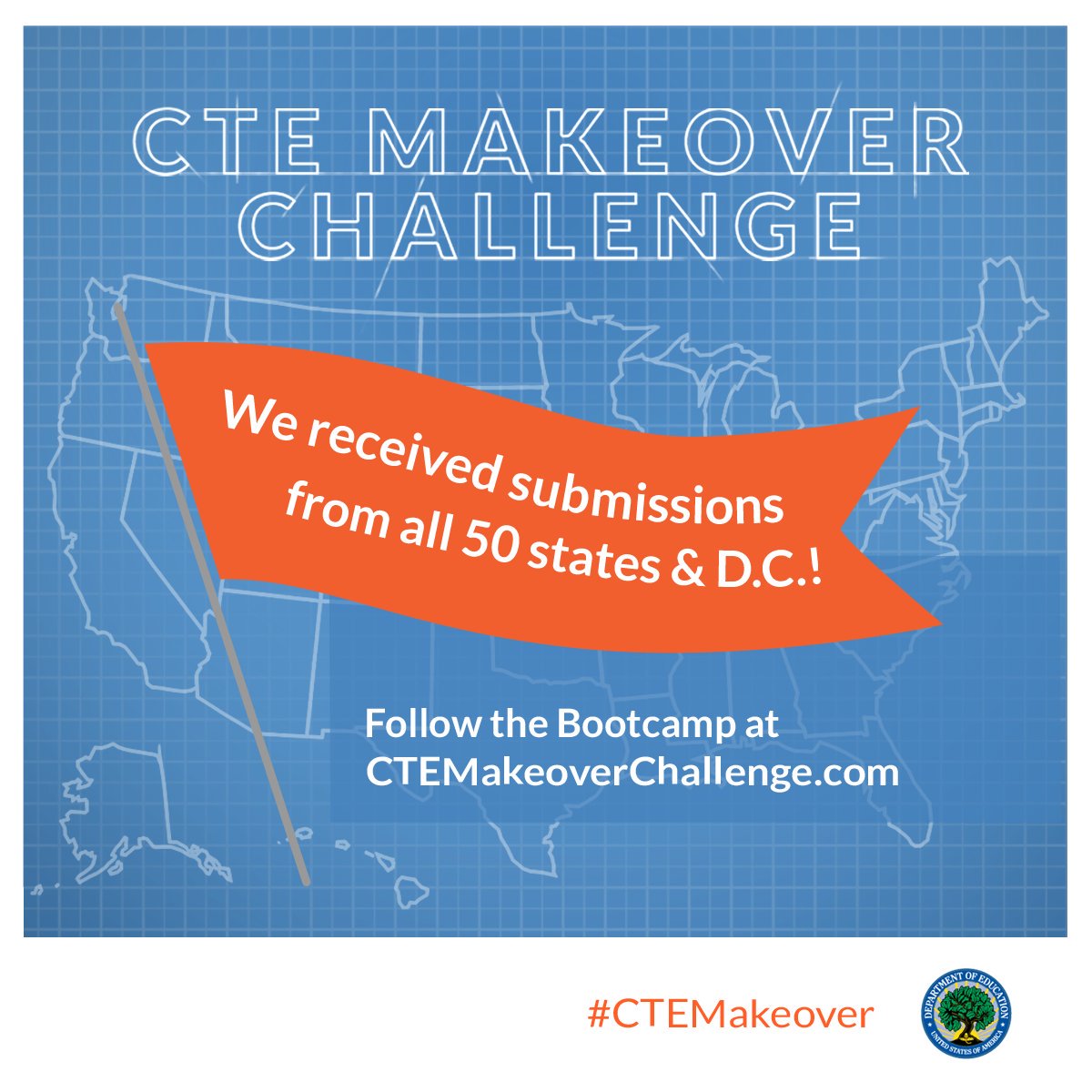 The Challenge was first announced at the 2015 White House Maker Faire and submissions opened in March 2016. Schools interested in participating submitted their first round submission consisting of school details and makerspace goals, and following the close of submissions, all eligible schools gained access to the virtual CTE Makeover Bootcamp.

Included below are the many readings and free resources that were made available to solvers entering the CTE Makeover Challenge, as well as the lesson materials offered during the six-week virtual bootcamp.

Use of these resources and tools was optional, but encouraged.

All eligible entrants to the CTE Makeover Challenge were invited to participate in the CTE Makeover Bootcamp (“Bootcamp”), a six-week program that provided instruction from experts, as well as suggested assignments, readings, resources, and office hours. The Bootcamp prepared participants to improve and expand upon their proposed makerspace concepts. At the completion of the CTE Makeover Bootcamp, eligible participants submitted a second round (“Blueprint”) submission that included detailed design plans, budgets, and implementation strategies.

Lessons included in the Bootcamp are described below, and a downloadable PDF of all lesson plans is available here and recorded webinars are available on the CTE Makeover Bootcamp YouTube playlist here.

Schools from all 50 states and Washington D.C. entered the Challenge in April 2016 by submitting their preliminary makerspace plans. Please see a list of all eligible schools that participated here (PDF).

This website contains information and resources from public and private organizations that may be useful to the reader. Inclusion of this information does not constitute an endorsement by the U.S. Department of Education (ED) of any products or services offered or views expressed. Blog articles provide insights on the activities of schools, programs, grantees, and other education stakeholders to promote continuing discussion of educational innovation and reform. Blog articles do not endorse any educational product, service, curriculum, or pedagogy.

This website also contains hyperlinks and URLs created and maintained by outside organizations, which are provided for the reader’s convenience. ED is not responsible for the accuracy of the information contained therein.